A quick look at the menu at Otra Vez, Akhtar Nawab’s new restaurant in New Orleans, reveals many of the same classic Mexican dishes he serves at his beloved Brooklyn spot, Alta Calidad; there are quesadillas and tacos to be had, but there’s also a lot that’s unexpected, like charred cactus, pumpkin blossoms, fluffy burrata, and roti in place of regular corn tortillas.

Nawab, who spent several years cooking at Gramercy Tavern and Craft, wants Otra Vez to echo everything Brooklynites love about Alta Calidad while still feeling true to its newfound Southern location, as well as NOLA’s rich history. Common design elements serve as one way Nawab and his team tie the two restaurants together; Marysia Schultz, who designed the mural at Alta Calidad, created a Gulf seafood-themed wall at Otra Vez. Meanwhile, in the bathroom, there’s a painting of an octopus. “It’s a much bigger space,” Nawab says.

The menu at Otra Vez includes some of Alta Calidad’s best-sellers, like the shrimp tacos, which Nawab admits he never expected to be so popular. “They were one of the last things to go on the menu,” he says. “We reworked those flavors, and I think that has worked out for us.”

There’s also a quesadilla made with Oaxacan cheese, pumpkin blossoms, and ancho chile, as well as carrot halwa tres leches cake for dessert. In-the-know guests can ask for the off-menu mexican roti, which comes coated with nopales, serrano crema, habanero pickled onion and pickled local radishes. Nawab and his team created a starter for the roti roughly a year and a half ago, and now, he says it feels like a family member. “We do have to feed it every day or it dies, it’s like a pet. We started it in Brooklyn and brought it down here, and it really does have this cool Mexican, Indian, fusion.” 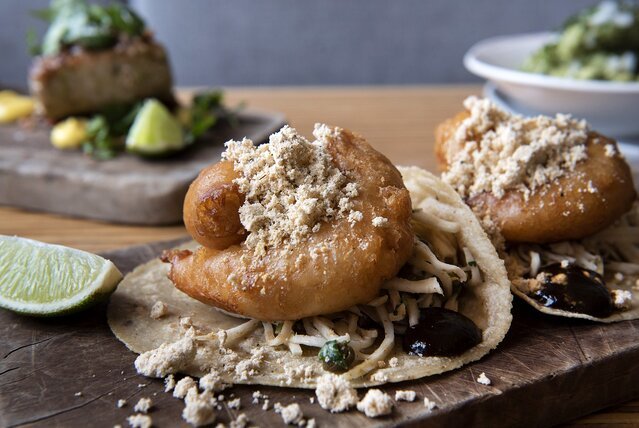 For now, Otra Vez is open only for dinner, and brunch service will open up in the next month or so. Guests who want to enjoy Nawab’s creative take on Mexican food in a fast-casual setting can swing by ACTQ for tacos, rotis, and tequila cocktails to-go.