Meet the NYC Restaurateur Who Should be on Everyone’s Radar 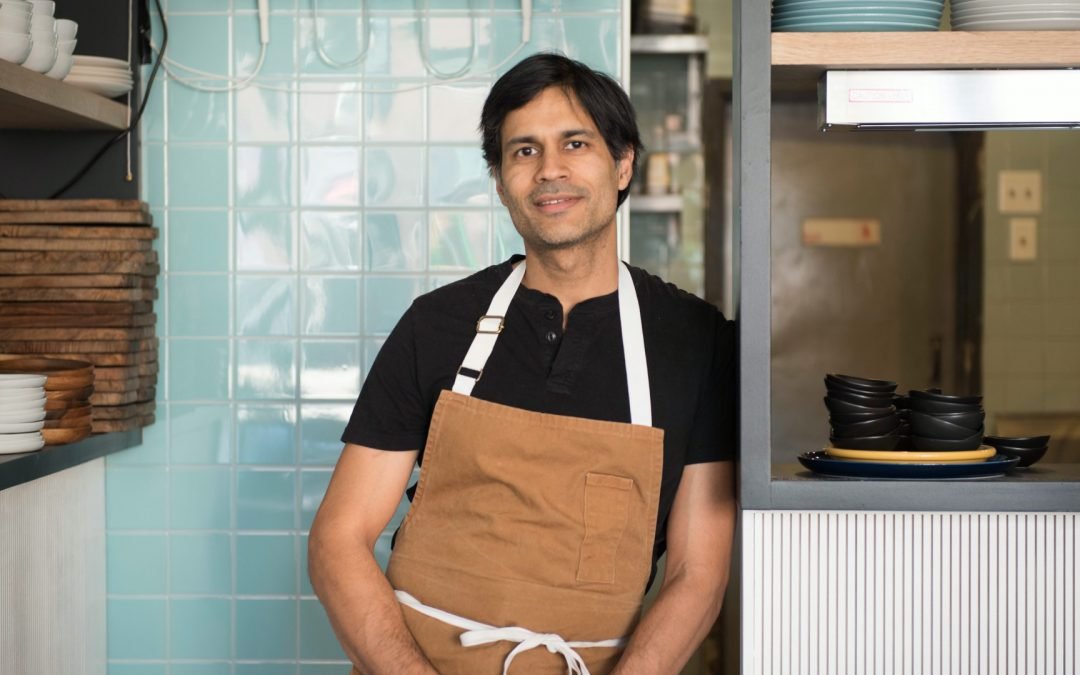 Akhtar Nawab, a mentor to David Chang, has a growing collection of restaurants

Akhtar Nawab is on the rise. Though his name may not be recognized by some die-hard restaurant-goers, he was a protege of Tom Colicchio, and a mentor to David Chang. Since the closing of the acclaimed Elettaria back in 2009, he has rebounded with a handful of projects in New York and beyond.

In the spring, Nawab opened his first New York sit-down restaurant in a decade, the Mexican cantina on Vanderbilt in Brooklyn, Alta Calidad; he’s behind the fast-casual Choza Taqueria at Gotham West, World Trade Center, and elsewhere; and he’s a partner in fast-casual Indie Fresh. Outside NYC, he opened Fero in July, an Italian restaurant in Birmingham, Alabama, and he’ll open Prather’s on the Alley in Washington, D.C. later this fall.

Even if the dining public may not know him, he’s been on chefs’ radar for a long time. “When all us cooks would go out after work and ask each other, ‘Who would you have cook your last meal?’ everyone said Akhtar,” says Chang. “Everyone wanted him because he is so good at cooking, so knowledgable, and cares so much about it.”

The son of Indian parents in Kentucky, Nawab grew up with his father who was a cardiovascular surgeon, his mother, a nurse, and his older brother in medical school — yet he followed a different path. He took up the bass, began listening to Rush, and spent a lot of time in the kitchen with his mother, a native of Lucknow in Northern India, cooking aromatic kebabs, biryani, and korma.

He gave college a shot, but ended up gravitating toward working in restaurants and eventually cooking. By 1994, Nawab left Kentucky to attend the California Culinary Academy, where he spent three years and cooked for leading voices in the Bay Area cuisine scene: Loretta Keller of the now-closed Bizou and Roland Passot at La Folie. After graduating, he flew to New York City and began trailing at Gramercy Tavern; he planned on checking out the kitchens of Daniel and Jean-Georges, but never did.

“When I got to Gramercy I didn’t even want to trail anywhere else,” he said. “What Tom was doing just blew my mind. I didn’t understand how he could get such a simple clear vision with rustic elegance on the plate.” There was a lobster tail, he recalled, “roasted with a spice blend he made himself, with amaranth, celery, and lovage — most of which I had never seen. It was so refined but the flavors were so big.”

A few years in at Gramercy Tavern, Colicchio chose Nawab to join the opening team of Craft, where he met a young cook named David Chang who was answering phones, hoping to get a foot in the door of the kitchen. When he finally did, Nawab took him under his wing.

“I was so lucky to have Akhtar as my mentor,” Chang says. “I cherished the times when I could learn from him: butchery, charcuterie, and sauces. I really can’t say more that he was very instrumental in my career.”

In 2002 under Marco Canora, Nawab opened Craftbar. When Canora left to open Hearth, Colicchio moved Nawab into the executive chef role. Given his own kitchen, Nawab began to find his voice, running plates of sea urchin spaghetti flecked with jalepeno or a bubbling pecorino fondue drizzled with honey, dotted with toasted hazelnuts and peperoncini.

After Craftbar moved to a larger space, Nawab began looking for a restaurant of his own. He took a chef job at European Union as he readied to open Elettaria, which would be his undoing.

Elettaria offered a menu of bold Indian flavors that had been well-received. “Nawab has run several kitchens around town,” Adam Platt wrote in New York Magazine, “but this is probably his most refined cooking to date.” All was proceeding according to plan. What could go wrong?

As it turns out, quite a lot. The market tanked, and the restaurant came crashing down. “Once Lehman closed, we took such a beating,” says Nawab. ”Our investors tried their best, but we could not save it.”

The months following the shuttering of Elettaria were brutal for Nawab. His marriage fell apart, his career was on the rocks, and he was broke. “It was very hard,” he says. “It seemed so insurmountable. I could not see my way around it.”

It took Nawab about six months to find a path out after the restaurant closed. He spent a lot of time with his daughter Ela and saw a shift in his priorities.

“It was really then that I associated my life with being a parent first,” he says. “I was like, ‘This is the most important part of my life.’ I had no interest in opening a restaurant again. Ela and I were getting closer and I started feeling better.”

The road back to the kitchen began with a consulting gig opening the Mexican restaurant Zengo for Richard Sandoval. “I was insecure about my self-worth as a chef and so confused about what was happening next,” he says. “Here’s a gigantic company that just wanted to get the restaurant open, and that was a good place for me to go.”

From there, he took what turned out to be a four-year culinary director position at La Esquina, which allowed him to feel his way around Mexican cooking. Nawab felt a kinship with its tradition-heavy cooking style.

“Like in Indian cooking, there’s a lot of history to everything and a lot of care in preparing these simple things,” he says. “There are people who cook all day for one meal. Mexican cuisine is the same way.”

He later began consulting for a friend who had a restaurant in Washington, D.C. called Table (now closed), and then partnered with a former regular from Elettaria, Matt Wagman, to freshen up and scale Choza Taqueria, which now has four locations in New York, and one in Birmingham, Alabama, where Food & Wine, Cooking Light, and Southern Living are based.

Then came Indie Fresh, in partnership with former COO of Juice Press, Shom Chowdhury — a fast-casual, health-conscious Indian restaurant with two locations in NYC. The concept was the most challenging for Nawab, who had to figure out how to cook with gluten- and dairy-free ingredients.

Recipes like gluten-free pancakes took many tries to perfect (flax seed, pumpkin puree, ground cashew paste, and inulin did the trick). But Nawab says the menu behind Indie Fresh also felt personal since he had lost a massive amount of weight in his twenties, trimming his 250-pound frame down to 170. “We wanted people to have something clean and healthy to eat that would not be so punishing.”

By March of this year, Nawab was ready to open another full-service restaurant: Alta Calidad, which he opened on Vanderbilt in Brooklyn with front of the house partner Michael Wetherbee.

The food is approachable and playful, with dishes like grilled octopus, pork belly, and potatoes skewered over paella-styled rice. Tacos are filled with skate wing, seasoned with saffron, and garnished with crisp onions. Plates to share include grilled rib eye with chimichurri served on a butcher block with a side of tortillas, or smoked hen of the woods with amaranth and cashew horchata.

Nawab is also making a mark outside New York. Last month, he opened Fero in Birmingham’s Pizitz Food Hall, an Italian restaurant with a menu that bears resemblance to the cooking of Craftbar days. And in November, he will roll out D.C.’s Prather’s on the Alley, with 60-indoor seats in Mount Vernon Triangle in a building that used to be an auto repair shop. Yet, he still remains rooted in New York City, where he lives just a few blocks from his daughter.

“I think back in early days people didn’t understand him, and how passionate he is about food,” says Damon Wise, who cooked with him at Craft and is now culinary director for an Atlanta restaurant group. “He is kind of reinventing himself again, which is awesome.”

Nawab, who is greying at the temples and resembles a taller, South Asian version of Gael Garcia Bernal, has made it to the other side with a confidence he hasn’t had in a long time.

“I feel more comfortable in my skin,” says Nawab. “I don’t have the agenda I used to have where I hoped to get nominated or recognized. I feel like I have something to say, and I need a place to have a creative outlet, and I really just want to cook for people.”